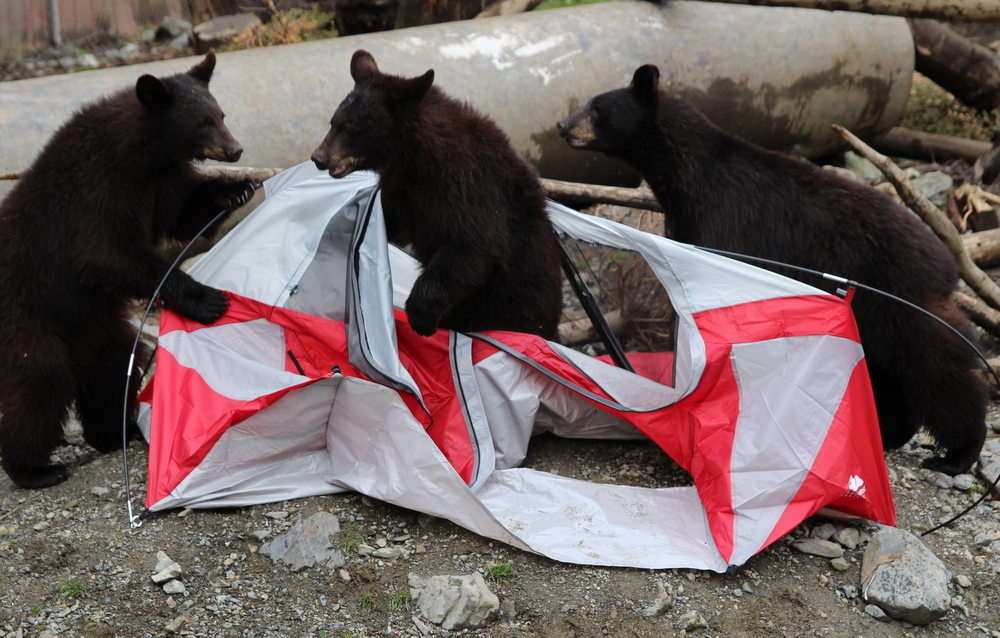 Bear in the Tent
I was on a little fishing trip, up in northern New Hampshire. It’s the home of them cutthroat and square-tailed trout. And I had had a little tent on my back. I had packed back, about a day-and-a-half journey, where all the soft-footed fellows couldn’t get. So I was back there catching trout. Oh, what a time I was having! And a little pup tent. And the day before, a little hole of water, oh, there was just fine big trout laying in there, and I was just catching just as fast. And I’d catch one… If I killed it, then I–I’d take it and eat it. But, ordinarily, I’d turn him loose, if it didn’t hurt him too bad.
15 And I’d always catch my fly on a little bunch of moose willow behind me. And I thought, “Next morning, early, I’m going to take my ax and go down there and cut that moose willow down,” ’cause I’d catch my little Coachman in that–in that moose willow. So I got up early, and I thought, “Well, I might catch a trout or two for breakfast.” And I was by myself. And I took my little old ax and went down and cut down this little moose willow and caught me a couple fish, was on the road back.

63-0223 A.DOOR.IN.A.DOOR_ TUCSON.AZ SATURDAY_
« 16 † And I heard a noise. It was an old sow bear. The place was full of them up there. Was a black bear. She had two cubs. And she had got into my tent. They had tore it down. There was nothing left. It just… It isn’t what they eat; it’s what they destroy. They just hear anything rattle, they–they jump on it, you know. And my old stovepipe was beat up, and, well, nothing to do but go back.
17 And when the old sow mother bear saw me come up, she run off and cooed to her cubs, and one of them come. The other one didn’t come. Well, I wondered why he didn’t go. Well, I–I had an old rusty pistol laying there in the tent, but the bear was on the pistol. So I wouldn’t want to shoot the old bear, anyhow, and leave two orphans in the woods. So I… And I sure… You take an old mother bear with some cubs, she’ll actually scratch you, you know. She–she kind of gets a little upset when you go to think you’re going to bother those cubs.

63-0223 A.DOOR.IN.A.DOOR_ TUCSON.AZ SATURDAY_
« 18 † So this little fellow was setting, and just a young tot of a bear. Looked be probably weigh twenty pounds; fifteen, twenty pounds. Was early, they just been out of hibernation a little while. And the little guy had his back turned to me, just all humped up, like that. “Well,” I thought, “what’s that little fellow so interested in?” And the old mother bear and the other little cub was out there, and she kept cooing to him, and he wouldn’t pay a bit of attention to her.
19 I thought, “What’s the matter with that little fellow?” I got me a tree in line, where I could get into if she got after me. So I thought, “I’ve got to see what’s got that little fellow so fascinated.” Usually they’ll run. So I kept moving around, watching her, till I got around sideways. And you would be surprised what was happening.

63-0223 A.DOOR.IN.A.DOOR_ TUCSON.AZ SATURDAY_
« 20 † That little guy had got my bucket of molasses, and–and a little half a gallon bucket full of molasses. And he had got the lid off of it. And they love sweet, anyhow, you know. He didn’t know how to drink it. So he just took his little paw and dipped it down in and licked, like that, you know, when he brought it up. And he–he couldn’t… I hollered at him. I said, “Get out of there.” And he turned. He couldn’t get his eyes open, molasses in his eyes, you know, looking at, you know. And he had sopped that bucket out just as clean as it could be.
21 And I just stood and laughed. And anytime, then don’t have a camera, you know, to get that picture. And there he was. And then after he got through licking the, you know, the bucket out, real good, he went over to the old mother and little brother, and they licked him.

An Independent Church of the WORD

What is the NAME?

Where Will You Spend Eternity?

How Will You Be Judged?

The Dreadful Day of the Lord